One of my good friends from college is living in South Korea right now. She is having an amazing time and posting all of these photos of different cultural events as well as mouth-watering photos of korean food.  My favorite thing about travel is probably the food. I love exploring other cultures by exploring their food as well as the traditions and rituals that go with them.  I am not unfamiliar with Korean food or Korean culture.  I have had a Korean suite-mate and we cooked a bit of Korean food as well as having friends who were obsessed with Korean culture.  Despite this, or rather because of this, I wanted to explore Korea a bit more.  So, although I cannot book a plane over to Korea to experience some Korean culture and food, I decided to attempt to explore it on my own, here in the United States. 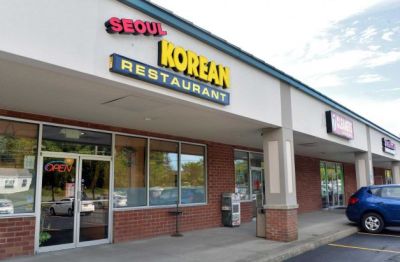 This restaurant does not exist according to Google Maps. Seoul Korean Restaurant is located in the Peter Harris Plaza, 952 Troy-Schenectady Rd (AKA Route 7) in Latham.  This place, in an old but decent strip mall looks like a hole-in-the-wall.  Upon entering, we sat down at a table flanked by rice paper wall dividers. Looking at their menu, everything looked good and I had no idea what to order. The wonderful host was very accomadating as it took forever to order. When I told her everything looked good, she asked me a series of questions- Veggies? yes. Meat? yes. Spicy? yes. Chicken, Pork, shrimp, beef, seafood? Pork or Beef. She recommended a Beef and Korean vegetable stir fry with a spicy sauce.  I was sold.  My friend was starving and ordered 2 meals–Dolsot Bibimbap (Bibimbap is a bowl of rice with an egg cracked on top surrounded by spoonfull of various things– carrots, mung beans, beef, mushrooms) as well as a Kimchi Pancake.

The utensils given were chopsticks and nothing else which made me very happy. We were each given a little plate to put our food in.

Korean meals normally have little bowls of food that come regardless of what you order.  We were given 5 little bowls:

They were all very good. The kimchi was my least favorite because everything else as absolutely superb.  The pancake came first, and at this point, we decided we were going to share everything anyways.  Korean style meal.

The pancake and the little bowls of food around it.  The Kimchi pancake was fabulous–despite me not being a fan of kimchi in general. It was crispy and tender on the inside and over all amazing. I prefered it plain than with the soy sauce because it just made it salty.  You could taste the pancake better.  While they call it a pancake, it is more like a pizza with 8 large slices.  I would recommend ordering it for a group of 6-8 people.  That being said, we finished most of it.

The rest of our food came…

I am holding up my beef and Korean veggie stir fry (above) while my friends is in front of her Dolsot Bibimbap.

Korean Rice is a short grain rice that it cooked until it is sticky.  It clumps together easily.  The bibimbap was served with a red bean paste sauce–a little bit spicy and sweet– which is a Korean staple. My Beef stir fry was very good. It was sweet and not very spicy and was amazing with the rice.  Throughout the meal we continued to work on all the dishes…

Eventually, after a magnificent feast… a lot of the food disappeared (and some was packed up to take home). 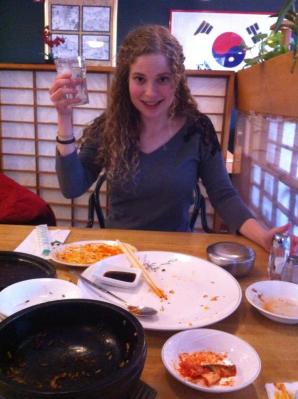 The bill came with two little jars of a tiny dessert drink.  The ingredients were as follows: Water, Fructose Corn Syrup, Sugar, Skim Milk Powder, Glucose, Flavor, Culture.  With ingredients roughly translated to: Water, Sugar, Sugar, Milk powder, sugar, flavor, bacteria etc… we knew we were getting a fair amount of nutrition in this tiny drink.  But a little bit of food, despite how unhealthy it may be, cannot do terribly much harm. It tasted roughly as one would expect it to taste… like watered down sweetened milk with some ambiguous fruity flavor to it. It was not good, but it was not bad either.

The food was fresh, good tasting, fun with generous portions and not too expensive. Although I doubt this food would be considered gourmet for Korean standards, as I am not a connoisseur of Korean food, I would not be able to tell the difference.  Like champagne, if you cannot tell the difference between barefoot bubbly and Perrier-Jouet, there is really no need to drink the Perrier-Jouet.  I definitely recommend it and plan drag my friends and family out to it frequently.